Here is a draft of the program notes I wrote for the screening of films by Dianne Ouellette I curated for the Filmpool that screened at the Artesian in Regina: 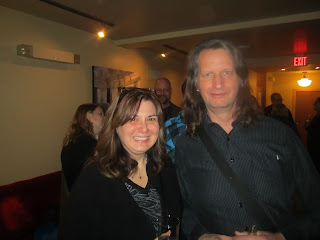 From the first time I saw Dianne Ouellette's films, I was humbled. Even her earliest films had an incredible elegance and depth. She has always kept her techniques relatively simple; image with sound, but her instinct for combining these elements defies imitation.
In searching for Dianne's secrets, I have looked more than once at what she says about her own work, especially her earlier artist statements. Two factors emerge within Dianne's self analysis. The first is an admission of how long the project took to create with an inevitable apology for the film's late release. This type of rationalization has previously always seemed like Dianne's method of avoiding talking about the more personal aspects of the films, her brave, soul-searching content, but instead to safely redirect discussion towards the filmmaking process. The second factor I found was for Dianne to discuss her films in terms of their importance as documents of her family and family history. Again, a deflection exists as she shifts authorship away from herself and onto the individual subjects. I now wonder if my own dismissal of Dianne's self critique has been too quick. History, time, and aging are central to Dianne's discussion of her work as well as being central to the work itself.  Her criticism of the time it takes to create this work, the delay and distance between the shooting of the subject and the exhibition to the audience, is a curious obsession. This possible thematic element has become important to me when considered alongside evidence of my own viewing experiences as I revisit her films through the filter of time. An acute awareness of the events on-screen existing in the past within a confined  chronological period is reinforced through the discussion of production schedules and delays. We know that these events happened and we also know that events must have continued afterwards. In Brechtian fashion, we are not only aware that we are watching a film, we are also aware that the filmic events did not conclude with the completion of the project.
Age and experience cast new light on all art. In revisiting Dianne's films, I am seeing something new and surprisingly fresh in these images and voices. I still stand by my 2007 Splice Magazine analysis of her films as "memory presented as fluid and sometimes frozen through the use of formal conventions" and that "time stops just as memory obsesses over single moments, ignoring all others".  Five years later, I still see Dianne as a master at using film as a manipulation of time, but now, more than ever, I see her as an author of memory. She does not hold back; issues of death, regret, and sorrow mix with love, joy, and fun. With first impressions, Dianne's films strike the viewer as being more about melancholy than amusement. On multiple viewing, especially when viewings are broken up by large periods of time, the oppositional forces of her life appear to slowly merge into one. Dianne shows us her life, not as a series of historical moments, tragic hardships, or romantic trysts but rather as an amalgamation of events, each intertwined and indebted to the last. This is what cinema is best at, showing  a flow rather than a snapshot. Life does not have a decisive moment, it has blurred moments that are a bit of this and a bit of that. We sometimes choose to remember only the good or only the bad, but Dianne will be there reminding us that we live in a blurry place that cannot be so easily contained.

Dianne shows us her life so that we can better see our own. She uses the camera as a mirror and then challenges us to gaze at ourselves. We look at Dianne's life, and ultimately at our own lives, as an unsolvable conundrum of sadness and elation. Her bravery makes us all better people. Yes, it may be that the creation of these films is cathartic for Dianne herself, but in making them so public, presenting them on film to be communally shared, a new catharsis is formed which allows strangers to begin down their own paths of self discovery.
- Gerald Saul, curator, October 2012
december (11 minutes, 16mm, 1997)
This was Dianne's second film and the first in which she truly embraced her now trademark style ; using direct address audio commentary alongside casual, almost home-movie-like film clips. Dianne discusses her own life and her relationship with her mother as she struggles with entering adulthood.

Ashes (7 minutes, 16mm, 2005)
Full of music and journeys, this visually powerful film features Dianne's uncle as he attempts to deal with the memory of his late wife. Amidst the melancholy background of photographs and the cemetery, brightly lit carrousels still spin and the cycle of life and renewal is constantly in motion.

sigh (9 minutes, 16mm, 2001)
This deeply symbolic film uses an image of a horse, it's grace and freedom confined by the slow motion process of filmmaking, to consider the illusion of emotion. Included here as a representation of how Dianne uses film to poetically come to terms with her own life and personal issues.

1971 (3 minutes, super-8, 2008)
Dianne features her grandfather whose voice-over narration describes meeting his wife and how she eventually runs off, abandoning him for another more flamboyant man. The film challenges our trust of memory and the stories we hear when the images of a prone body suggest a different, far less romantic end to this story.

Aurthur (3 minutes, super-8, 2005)
A day in the life of new puppy; its energetic and spontaneous life captured with a controlled and steady camera. The dog finds conflict even though the film is without a story.

Departure (3 minutes, super-8, 2003)
This film combines moments of old television shows with film of Dianne's sister in the process of packing.  It epitomizes the fusion of the everyday with the momentous events which punctuate our lives as Alison prepares for a life-changing departure. Mass media, indifferent to the events of its viewers, punctuate the process with irony and wit.

Bootalicious (3 minutes, super-8, 2010)
Bold, strong, and fun, this film has always seemed like the best portrait Dianne ever did of herself.

Summer (45 minutes, digital, 2007) PREMIERE
With this complex weaving of events, voices, and images Dianne attempts to document her sister's struggle with a bi-polar disorder. The borders of time and history are drawn increasingly into question as Dianne blurs the events of the past and present, drawing upon images from her previous films and asking questions that do not yet have answers.

Gerald Saul, curator, is a long time member of the Saskatchewan Filmpool and a professor in the Department of Media Production and Studies at the University of Regina.
Dianne Ouellette - Artist Statement
Film for me is about memory.  As life unfolds, so do the stories in my completed works. My work is a reflection of my experiences and memories.  Themes of love and loss flow through many of my films. Feelings of nostalgia come forth in the works with grainy images created with super 8 and 16mm film; as the images dancing on screen seem to be from some far away time like a distant familiar memory.
I have found that throughout the years of public screenings that viewers watch my films and reflect upon their own lives relating with their own life experiences. There is a lot of sadness in the reflected images of my films, but there is also humor and happiness. There is a definite mix of emotions, even for myself when re-watching them years later.
"december" tells the story of life, death and turning thirty. "sIgh" tells the story of failed relationships in contrast to the 50 year marriage of my grandparents. "Ashes" is a reflection of mortality through my grandfather's grief over the death of his wife and the most recent death of his son who once told me the secret of life. All these films are a reflection of life so far and all the expectations that are to come with aging.
All of my super 8 films were created for the "One-Take Super 8 event" held annually in Regina.. "Aurthur" is a silent film that introduces my new puppy from years ago. "1971" is the story my grandfather tells about my biological grandmother who I never knew. In my Grandfather's mind she ran off with a movie director from Hollywood; when in fact she was found murdered on a street in Edmonton in 1971. "Bootalicious" is a bittersweet goodbye to the trucker I once dated. "Departure" is a step from the craziness that the cards of life had dealt as my sister and I depart on a journey to England to work on my film "Summer".
Lastly, "Summer" is my documentary that was completed in 2006, but sat on a shelf collecting dust until now. It tells the story of my stepfather and sister who were both diagnosed with bipolar disorder in the summer of 2002. I wasn't ready to show the documentary until recently. It's a personal story about my family and the struggle we went through to get well.

I look back on my work with great sadness at times because so much has changed since I started creating my work. I have lost my grandmother, who we see waving goodbye to me in "sIgh". I have lost my Uncle who we see playing his guitar in "Ashes" with my grandfather who could once play the violin. I see my grandfather in so much of my work and now he sits in a nursing home with no memory of his wife of 50 years, as he has Alzheimer's disease. Lastly, I see my brother, Guy,  in so many of my films. He was killed in a rig accident almost 3 years ago. The last images of my brother speaking on camera are in "Summer". For me this will remain my memory of the way he looks and the way he sounded when he spoke.
Know that through all the sadness that is expressed in my films there is true happiness for having such a collection of work. "Life is good.", as my sister, Allison concludes in "Summer".

Dianne Ouellette - Biography
Dianne Ouellette earned her BFA in Film and Video in 1995 and her BA in Theatre in 1993 from the University of Regina. She was born in Prince George, BC and as a child moved to a small town in Saskatchewan. As well as being known as an independent filmmaker, she has worked in the corporate training video world for over 10 years. Within the film industry, she has been a producer, writer, director, cinematographer, videographer, and editor. Dianne has served the Saskatchewan Filmpool as its president and as the editor of Splice Magazine. Her award winning films have been screened internationally in Paris, Croatia, India, Italy, San Francisco, New Jersey, Los Angeles, Telluride, Vancouver, Victoria, and Toronto.
Posted by Gerald Saul at 9:08 AM